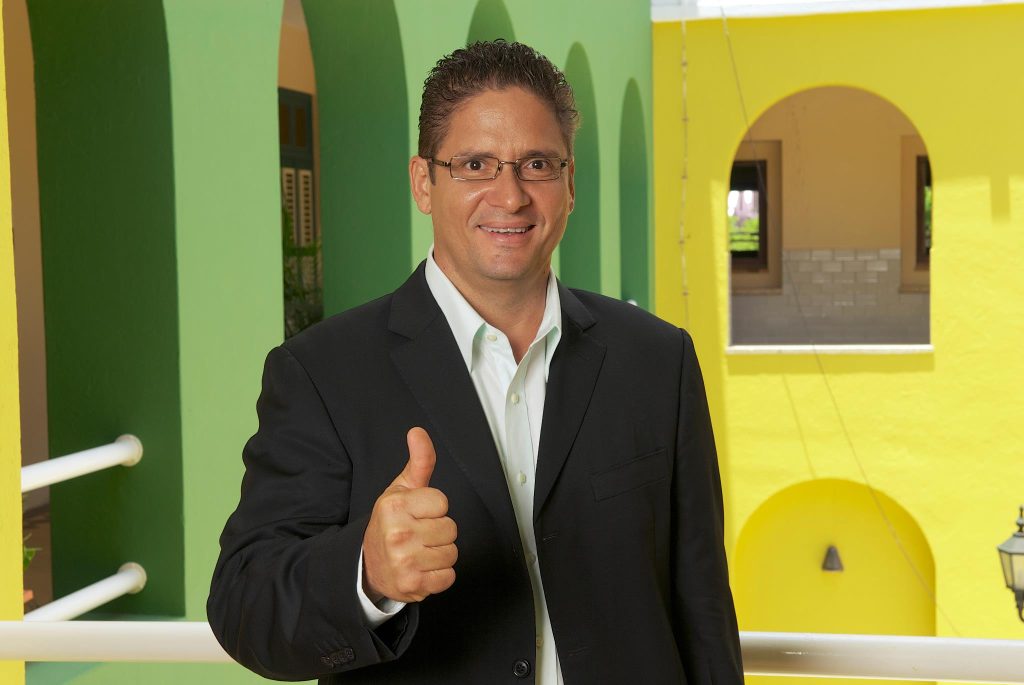 Founder of Child First Foundation and After School Academy
Christian A. Peterson is the chairman and founder of Child First Foundation and CFF’s After School Academy (ASA). Three 3 years ago they started with the ASA and as of the 27th of May 2018 they have there own building facilities. The foundation also has a daily interactive live radio talk show “2121 Live Atardi” at the radio station Z-86 and an Educational Training Center, the CFF E-Center, all being managed by a team of dedicated volunteers.

Could you share with us something about your family life?
”I was brought up in a very social, caring and active environment. My father (he was a poet and writer) and mother (she was a house-wife) were very committed and active persons in our society. They were both involved in the emancipation of women rights movement, they fought in several ways against racism, poverty and abuse against the vulnerable. They were also involved in bringing “Cooperativism” to Curaçao. For example, my parents started Cotoko, a supermarket based on “Cooperativism” and they also founded Fundashon pa Konsumidó, the watchdog foundation for consumers rights.

At the age of fifteen years old, I made up my mind on what I would study and consciously chose to bring the right balance to my social upbringing. As I saw many beautiful social initiatives fail, as Cotoko ultimately did, because of the lack of a sound financial approach in these social projects, I decided to become a Dutch Chattered Accountant (Register Accountant). In my view, we should apply prudent fiscal principles in all socially necessary projects and programs. There is, an honest price for everything at which everybody wins and sustainability is a given.

My loving parents were both very spiritual and made it very clear to me at a very young age that education is key for development and progress! The combination of the two, connection to Source (God) and education, is the formula. My father was the President of the Council of Churches and used to preach often in churches.

To my parents, it was important for us to take a stand in life and be great advocates of fairness in every aspect of the word.

This education at home is probably the explanation that I am committed to aim at being involved in sustainable initiatives to help create awareness, happiness, mindfulness, purposefulness in significant ways.

“On a personal level, I have experienced disempowering beliefs that prevent our people to live to be their best self. Our own educational system in Curaçao is creating low self-esteem among our children. This has to change!”

Could you name one example of these disempowering beliefs?
One example is that in our history book for primary scholars, we (still) quote an unnamed and unknown Spaniard that apparently must have referred to our islands as being “Islas inútiles”. Our children at a very young age are being poisoned with this stupidity for years now!

I am 100% certain that there must have been other Spaniards and others that saw the huge number of strong positive characteristics of our beautiful islands, like being the (new) world’s best regional hub because of our geographic location. Why not quote those Spaniards or others that saw and made use -big time-of the positives”.

Whether you believe it or not, but the educational system makes or breaks an entire nation.

A very recent example in this respect is a 9-year-old student of ASA that was selected by her peer-group in her class to give a presentation as representative of the group; she declined because she thought she wasn’t up to it and not pretty enough, she literally made it clear to the group to choose someone else, “not me, I am ugly” she said!”

“The main reason we started Child First Foundation is to combat the epidemic of the absent fathers in the life and education of our children. The issue of father absenteeism has grown and is taking on vast proportions, and this needs to be addressed urgently. A huge portion of our community, mothers and fathers one way or the other, incorrectly believe that children need only mothers. With mother working out of the house, where daddies are absent, children are left behind unsupervised and grow up on the streets. That is bad news!”

Fathers need to step up to the plate and become active in the lives of their children. At the school of Cleon for example, they would refer to a parent helping children with master reading as a “leesmoeder” (mothers helping children to master reading). Chris needed to ask the teachers if they could change that word and recognize him as a “leesvader” or perhaps use the more gender-neutral term “leesouder” (reading parent).

The problem of father absenteeism, that I consider a crime against humanity, is the main reason to start with Child First Foundation and later the After School Academy, to make sure that children get a well-balanced education in the afternoons.


In his personal journey Chris went to a 5 steps process from accepting:
1. the importance of GOD in his life, call it awareness;
2. to happiness in his life (Chris has been President of, amongst others, the Art of Living);
3. through mindfulness practices;
4. through purposefulness and
5. of late being “significant” by being action oriented and add something significant to mankind, call it a legacy.

As a great advocate of being practical action and result oriented, he told us about the importance of getting things done, because people in need, need help now. Against this background, he decided to do something that can have immediate effect; that is why he started the Child First Foundation’s After School Academy.
Chris: “The aim is to become a “pilot”, so that the concept of holistic education can become a model on a world level. The goal is to educate children that when they become fathers, they understand that this brings along responsibilities towards that child. It is also important to educate mothers, to don’t use the child to manipulate, especially there where the parents are divorced or don’t live with one another”.


“Our mission is a “Yu di Kòrsou” as world citizen in different walks and areas of life. That is why we choose to teach English to our students, being the world language, as a second language, beside Papiamentu, to be able to communicate with the world. Only in China over 300 million people speak English and in India, as the second-largest populated country with a population of over a billion, it is the major second language as well”.

“Our vision is to enable people to develop holistically; that is spiritually, mentally, physically and artistically. In fact, we need more schools and education to have fewer prisoners in our prisons and less youth in our Youth Detention Institute (GOG) and fewer patients in our hospitals and clinics. The women liberation movement has made major strides since the fifties of the 20th century. Now it is the turn for our men to get their act together and be present.

Father absenteeism, you will find in all neighborhoods on the island, not only in Buena Vista. We nevertheless hand deliberately choose the school “Kolegio Nechie Pieters” as a pilot for the world, being one of the poorest schools on the island in one of the neighborhoods that needs all the attention and assistance of the world. We are confident, as the saying goes, that if we make it in Buena Vista, we can make it everywhere.

As we speak, Bonaire is very interested in our approach and requested us to establish there; we recently shared our draft-articles of incorporation with parties in Aruba and Sint Maarten is also showing interest to have a Child First Foundation’s After School Academy there. We want to, in due course, register our concept at Geneva, Switzerland and have it available for the whole world.

In our approach at the After School Academy we focus on the following elements of the curriculum in the sequence of importance:
1. GOD, faith liberates you from fear and creating comes from the Source of creation.
2. Forgiveness, in all three aspects, forgiving others, asking forgiveness from others and forgiving oneself, liberates from anger and negative emotions and feelings.
3. Mindfulness practices, to complement prayers and to help the children to cleanse themselves from toxic effects of hormones created by negative emotions and feelings.
4. Seva, is the Sanskrit word for selfless service or work performed without any thought of reward or repayment, to contribute to the improvement of a community. These acts of kindness we require all our students to offer to the community as a contribution. Giving to others affects the giver in a powerful, positive way.
5. English as the second language besides our local language, Papiamentu. We value Papiamentu as it is the most beautiful language of the world, the only language that has survived colonialism in this part of the world. But we teach English as a second language because we are very aware that cohorts and cohorts of children finish their “Funderend Onderwijs” (Primary school level of education) without getting English nor Spanish as a school subject in Curaçao. In our approach, we start teaching English to prepare our 4-years old students to become world citizens, so that when they turn 7 or 8 years old, we can give them access to on-line learning of school subjects that are available in English almost for free. This is why we put so much emphasis on teaching English as the second language.|
6. Arts and other expressive subjects such as drama, theater, music and dance, but also homework assistance, physical exercises/sports are also part of our holistic program.
7. We have monthly day trips, to prepare our ASA children to gain a more worldly view in their outlook, on their way to become world citizens ultimately.


We also emphasize the importance of these three elements:
1. Breathing, we teach sound breathing techniques because our breaths are like love notes to the body that relaxes the mind and body.
2. Sleeping, because it is important for rest, for recovery and to restore information and we try to convince the parents that their children need to go to bed early to have enough sleep.
3. Water-household of the children, in our war against excessive (white) sugar consumption, the children need to drink enough water because it helps to detox, purify and heal their body.


We still have a long way to go, but we have taken the first steps. If you look back over the past three years since we started ASA we have started to notice
• Positive effects that our approach has on the behavior of our children;
• slightly improved involvement of parents and the neighborhood;
• a growth in the number of volunteers and donors, be it in cash, goods and services;
• support from the Roman Catholic school board to keep Kolegio Nechie Pieters open and the approval and blessing of the bishop of the Diocese of the Roman Catholic Church for our holistic program and approach, including our mindfulness exercises.

One of the 250 Influencers
As core group of Share2Uplift we totally support this bold effort to enable change mindsets among schoolchildren, their parents and the neighborhood of Buena Vista. We would like to call all those that want to align with Child First Foundation (CFF) and CFF’s After School Academy for more information, to apply to become a volunteer or just make a donation to feel free to do so.