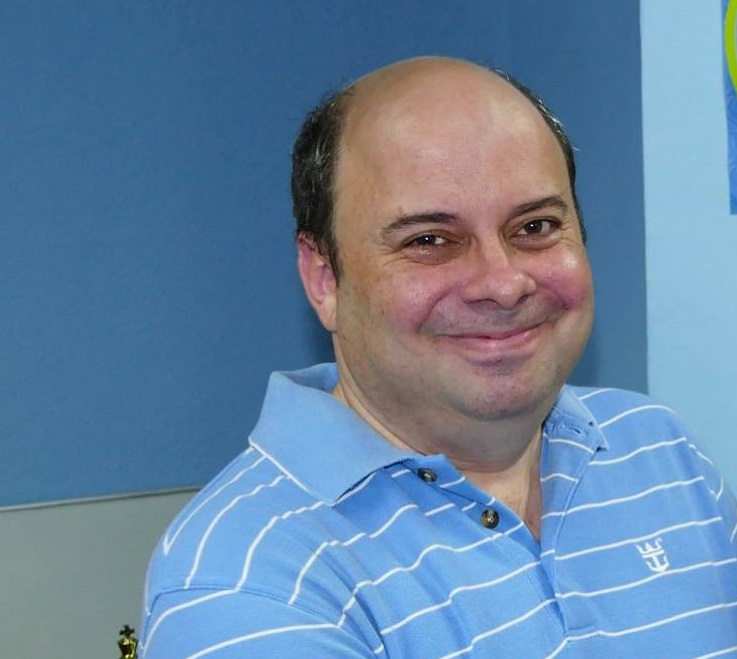 Fabio, could you share with us some information about your family life?
I was born in Curaçao and both my parents were very important to who I have become now. They supported me a lot when I was growing up, but both unfortunately have passed away. I have an elder brother, and I am not married nor do I have children. I am part of a family business and have studied many things in the retail branch.

When did you start playing chess?
I started playing chess when I was 5 years old by accident. At age 15 I wanted to join a club, Chess Club Janwe, as the chess computer programs weren’t that strong yet and I wanted to get challenged more. My teacher at the club was Alvin Smith, who has been teaching youth for more than 40 years. Being taught by Mr. Smith motivated me, because of his experiences and insights into the game of chess. After a while, he advised me to join another club Schaakvereniging Nacho Moron, where I could meet a tougher competition of adults that were playing chess, as this would help me raise my level of play. And indeed my level of play improved quickly, not leading immediately in winning the competition, but after three years I became the chess champion of our club for the first time. This was before I left for Holland for my further studies.

How did Holland influence your chess career?
Arriving in Holland, I became a fanatic of sorts. I played in 3 different chess clubs during the week, but I also started teaching youngsters the game of chess on Fridays from 7 to 8 pm and on Sunday morning I was a chess teacher also in Tilburg.

The ambiance in the club, and the way my fellow club members accepted me, made me feel very at ease at the club. Some of them had already visited lots of other countries and they have already met a lot of people from different cultural backgrounds because of that, it made it for me far easier to integrate into the club and in Holland for that matter.

How did chess help develop you into the chess person you are today?
One of my big lessons learned is the top chess players  are human beings just like I am, and they make mistakes in other parts of their lives.

Where did this interest to teach youth come from?
As I was a member of a chess club in Holland where I won a championship, some members approach me and asked me if I would be willing to give a hand and teach the youth department of the club. I accepted, and this also helped me to develop my mentoring and coaching skills related to the game of chess, which helped me also in my games.

What is your Big Why for playing chess?
In my chess career I have met so many people from different backgrounds, like physicians, judges, businessmen, you name it and all have lots of experiences and they come from different parts of the world. Furthermore, the whole ambiance surrounding chess is special and when life is not exactly going as you would like it to go, chess is an excellent way for a sound distraction.

Have you ever won championships in chess?
Yes, I was twice the chess champion of Curaçao. I was 4 times champion of our club. In Holland, I was the club champion three times.

Have you competed internationally during your chess career?
Yes, I have participated in 7 chess Olympiads.

The first one was in the Republic of Kalmykia, which is close to the border of Mongolia in 1998.
In 2000 I participated in an Olympiade in Instabul Turkey;
In 2002 in Slovenia;
In 2004 in Turin Italy;
In 2006 in Mallorca Spain;
In 2008 in Dresden Germany and
in 2012 in Instabul Tukey again. In 1995 I participated in Halle Germany in a youth world championship tournament as I was studying in Holland. All of these experiences made me gain lots of international chess experience.

What was your biggest success in any competition you participated in?
That would be in Slovenia in 2002. I became an International FIDE master (FIDE = the International Chess Federation). Another success is that I have known so many people around the world and many I am still connected with. Those years were such enriching years.

Back in Curaçao you started to organize International Tournaments. Why?
I had developed such a broad network of contacts over the years.  All these contacts came in handy when I wanted to help expand the organization of International Chess tournaments in Curaçao. You can attract renowned chess players because it is based on “trust”. When I was back in Curaçao, I started organizing tournaments and used my contacts to make this a success.

I have been taught to teach youngsters chess by Herman Grooten (by coincidence he was also born in Curaçao btw) he is an International Chess master and Chess trainer and Chess FIDE master Petra Schuurman. Grooten has been involved in the training of Holland’s top youth chess talents. I have known him for some years now. When I need some kind of advice or something, I still App him. I also know a former Chess champion from the USA and I also at times approach him for some advice.

How does chess help a youngster in their development?
There is a scientific study available that has concluded that chess help youngsters in the development of their cognitive abilities. Like it helps them: in their problem-solving abilities; critical thinking; analyzing and thinking strategically, concentration and ability to visualize better.  And after games, people socialize and discuss at length the games played, and this helps them to get to know other people.

What are your strengths when you are playing chess?
Self–reflection abilities and this makes me understand that I can always become better.

What is a trait that is still a work in progress in chess?
In my preparations before a game,I am very aware of what I eat and I always strive to have a calm mind during the game.

Do you have other hobbies that you are passionate about?
Baseball. I was once the champion batter of the “Fruminga”- league when I was 9 years old. I had a batting average of 600.

Why did you stop playing baseball?
I got injured after a game where I was the pitcher. I tore a muscle in my arm and from there on stopped playing baseball. Soon after this, I decided to go and play chess.

I have one student that I started teaching and training when he was 8 years old in Holland. This youth player became the champion of the whole Brabant Chess region up till 10 years of age. At this moment in time, he has become such a better chess player than I am. This is what a good teacher wants to achieve, that the pupil surpasses the master.

What is the challenge you are dealing with in chess?
I want those I teach and train, to continue to play life long, either as a hobby or on a competitive level. I love it when the youth is happy when they are training with me.

Where do you want chess in Curaçao to be 5 years from now?
Within 5 years as a teacher, I would be happy if chess has become part of the curriculum at the primary level\schools. Up to now, we have noticed that there is sufficient interest for chess but not enough money to pay for the teachers, contrary to the after-school organization.

Where do you want chess in Curaçao to be 10 years from now?
10 years from now as a teacher of chess, I would love to have over 1000 children playing chess. Chess in Jamaica is very popular and also in Surinam. I hope in Curaçao someday we can achieve this kind of support and sponsorship also.

What do you want people to say 20 years from now as you are celebrating your birthday?
That I was a good coach.

What makes you stay optimistic about the future of chess in Curaçao?
The computer and technology have driven chess to new heights and it is much easier for people that want to start and learn to play because of this.

What was a defining moment in your chess career up to now?
My contact via email with Garri Kasparov.

Can you describe Fabio’s chess career in one sentence?
I have seen almost everything in the chess world.

How do you keep your chess knowledge and skills up to par?
I keep my knowledge up to par because I am coaching and training people. About my coaching, I follow courses for my coaching because there is always room for improvement.

One of the 250 Influencers of Curaçao

Fabio Mensing is a passionate, dedicated, disciplined, chess-player, certified chess coach, and trainer who loves to share his knowledge of the game of chess, but also loves parts of the things surrounding the game, like the fraternity and friendships he developed through the game of chess. Getting acquainted with chess at the age of 5, but getting serious and passionate about chess at the age of 15, Fabio was playing against players that were older and thus more experienced than him. Early on his competitiveness got him to become the champion of the clubs where he played here in Curaçao and also in Holland where he went for his studies. Up until now he still has contact with people he met during his stay in Holland and people he met during the Olympiads he participated in. Fabio participated in an International Chess Youth championship and participated in 7 International Chess Olympiads. These highly competitive tournaments made him develop his chess game to a high level, brought him lots of contacts, and made him more aware of what he liked and disliked about these very competitive tournaments. Of late Fabio has evolved more into a new role, being less a competitive player and more a chess coach and trainer, especially for the youth. His ambition is to have chess entering the primary school level within 5 years from now and that there are enough chess teachers, that can teach chess as chess has become part of the curriculum. His further is striving to scale up the number of youth he coaches and mentors, having over 1000 children playing chess 10 years from now. Playing chess has numerous benefits for the player, like improved problem-solving abilities; critical and strategic thinking; improved concentration, and abilities to visualize. It also helps players to socialize better. For all these reasons, promoting chess is the thing he wants to promote from now on. For this, we consider Fabio one of the 250 influencers of the island, representing the “Sports and Educational” sector. Look at the list of the Influencers we have interviewed or reported on, up to now.