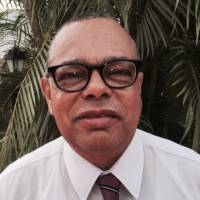 As a graduate in constitutional law and history from the Katholieke Leergangen Tilburg in Holland (1980) Mr. Oscar Castillo was a teacher for several years (1976 – 1995). He has a Masters degree in Law from the University of the Netherlands Antilles (1994). As a commissioner of General Affairs of the Island Government of Curaçao (1995 – 1999), commissioner of Finance (2002 – 2003) and member of the island council of the Island Government of Curaçao (1995 – 2007) he has a vast experience in politics. He has also studied political sciences with a special interest in electoral voting systems. Since 2007 up to today he has worked as a consultant & trainer in organizational and personal development. Mr. Castillo has a special interest in personal development, organizational development particularly cultural changes in organizations, leadership development and management. As an author in the early nineties he has published different papers and books on the political and constitutional system of the Netherlands Antilles and Curaçao. Of late (2013) he has developed in Papiamento course outlines aimed at personal development and personal leadership.

Workshops themes: Connect with and transform the behavior
Based on experiences as a former commissioner of Human Resources of the island government of Curacao from 1995 -1999, Mr. Castillo as a former professor / teacher decided to develop some new more localized course outlines more fitted from the needs of our island. Mr. Castillo in the end of the 1990-ties and beginning of the years 2000 was responsible for the introduction of a big transformative program based on Steven Coveys “Seven habits of highly effective people” and “Principle centered leadership”.

Based on these experiences as a former commissioner Mr. Castillo has now a well tested and developed course outline on e.g. civil servants, police officers, workers of a big utility company. This has lead to measurable behavioral  changes in those participating in his courses. He is presenting his localized courses in Papiamento to connect with and transform the behavior of his target audiences. He has of late been involved in year long program directed on school directors of the Roman Catholic school board and also been involved in training of the leadership and the rank and file of a newly formed political party on the island of Bonaire. The subject on saturday in Papiamento is: “Liderato personal: Ego i kompleho”.

Registration
For registration please sent an E-mail to korra@share2uplift.org. Please fill in the name of the speaker, day and timeslot.