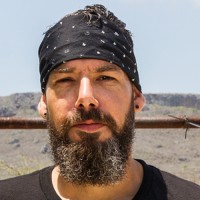 Andy Kirchner is the Managing Director of his own founded Buccaneer’s enterprises B.V. (Ltd) which is the umbrella company for 2ndLife Curacao and The Recycled Pirate. Andy gives workshops about life awareness, consults in social media strategies and creates functional art from recycled materials.

Webinar Theme: From wheelchair to entrepreneur
On May 19th 2012, Andy Kirchner had a scuba diving accident at Marie Pompoen, Curacao. Andy was stricken with caisson disease, also known as “the bends”, and a spinal injury left him paralysed from the waist down.
Andy would not accept the neurologist’s prognosis that he would not walk again. He said, “I did not fight and survive to live my life in a wheelchair”. Several treatments in a decompression chamber and gruelling physical therapy helped to regain some of his strength and ability to move again, but it would take more than just therapy to get him where he knew he wanted to be. When he was released from the SGR Monsigneur Verriet rehabilitation center in October 2012, the future wasn’t looking too bright. There was no social structure to help him regain his independence, and he was forced to move in with his parents. This created a lot of financial and emotional stress on the family. He knew that if he were going to reach his potential, he would need to take matters in his own hands.

By learning about his disabilities he started to develop his abilities. Growing every day stronger doing yoga exercises, and reading when he needed to rest to increase his knowledge. Beating adversity standing up from his wheelchair, to walking with two crutches and eventually even walking without cane.
Life continued and so did Andy’s development. As he became stronger, he was appointed commissioner for the national sports development foundation (FDDK) to advocate for handicapped (sport) rights. Meanwhile he started his business 2ndLife Curacao which whom he won the JCI IOBA Aspiring Creative Young Entrepreneur of the Year Award in July 2015.

Check out the Share2Uplift Webinar Series archives for recordings of past events.